How ambitious policy can prevent plastic pollution globally, from production to waste trade

Over the past few years, the EU has taken significant steps forward to tackle plastic pollution, with the adoption of an ambitious Directive on Single Use Plastic.

Several other discussions are also ongoing; with the review of the EU’s waste shipment regulations and new opportunities to address plastic pollution upstream with the EU Green Deal. Furthermore the EU & member states are playing an important role within the UN Environment Assembly (UNEA) process, where options for a binding mechanism on plastic pollution are being discussed.

The conference will bring together members of the Break Free From Plastic movement, policymakers, members of the press, and citizens worldwide as we come together to discuss how to stop plastic pollution for good. Building off of the key themes of the film The Story of Plastic, we will explore EU and global policy options, in order to find long term solutions to plastic pollution, from production to waste trade and end of life.

A VIRTUAL SCREENING OF THE STORY OF PLASTIC

The Story of Plastic takes a sweeping look at the man-made crisis of plastic pollution and the worldwide effect it has on the health of our planet and the people who inhabit it. Spanning three continents, the film illustrates the ongoing catastrophe: fields full of garbage, veritable mountains of trash, rivers and seas clogged with waste, and skies choked with the poisonous emissions from plastic production and processing.

The film exposes the impacts of plastic production and waste trade on the local populations, and showcases the work of activists who are  implementing solutions and advocating for policy action, culminating at the global level with the ask for a Global Treaty on plastics that would tackle pollution along the entire value chain. 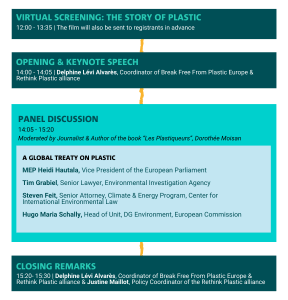 In the meantime, you can watch the trailer for The Story of Plastic below!

When ?
18 May 2021 - 12:00
Where ?
Online
Register now
Rethink Plastic
Manage Cookie Consent
To provide the best experiences, we use technologies like cookies to store and/or access device information. Consenting to these technologies will allow us to process data such as browsing behavior or unique IDs on this site. Not consenting or withdrawing consent, may adversely affect certain features and functions.
Manage options Manage services Manage vendors Read more about these purposes
View preferences
{title} {title} {title}